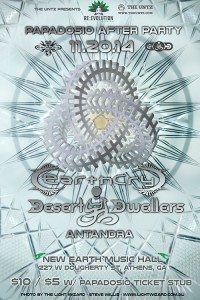 Very excited to be performing an opening set for Desert Dwellers & EarthCry at New Earth Music Hall in Athens, GA.

EarthCry
earthcry.bandcamp.com/
EarthCry is the musical side project of Anthony Thogmartin: the guitar player, songwriter, and producer of Papadosio. As a beneficial operation, EarthCry donates 50% of all earnings to different ecological initiatives around the world. His debut album, “Hear the Earth, Heal Yourself ∞ Heal the Earth, Hear Yourself” is an electronic journey that focuses on ancient solfeggio frequencies known to aid the human condition.

Desert Dwellers consists of Amani Friend and Treavor Moontribe; together they are one of the most pioneering and prolific downtempo artists hailing from the United States, having released over a dozen full length albums, several DD remixed albums, as well as countless singles, EPs and remixes for labels like Twisted, Black Swan, White Swan, Six Degrees, and Iboga to name a few. After the huge success of the “DownTemple Dub” series, and blowing up the past three years at some of the most prominent international music festivals including Lightning In A Bottle, Symbiosis, Wanderlust, Shambhala, Eclipse Festival Australia, Envision, Beloved, Sonic Bloom, and Earthdance, Desert Dwellers are gearing up for a very big year in 2014, beginning with a 7 week tour across the United States opening for world renowned Twisted Records artist Shpongle!