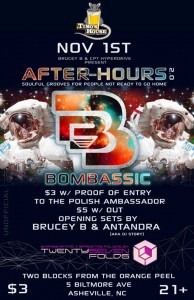 “Soulful Grooves for People Not Ready to go Home”

Closed out by the live performance of BomBassic

BomBassic (Asheville, NC) is the musical collaboration of Brucey B and Cpt. HyperDrive focused on creating sound full of emotion and energy. Raised on the raw sound of NY hip-hop, and groomed in Asheville’s eclectic electronic music scene, they exhibit a wide range of influences. From funk, classical, jazz to glitch-hop, house, and future bass, every resonating genre is explored. With Brucey B on the keys and HyperDrive controlling a custom DJ-FX rack, their high-energy live performance adds an incredibly soulful dimension to their sound. BomBassic’s music is always growing, in different directions, looking for new ways to connect with the listener.

Originally from Long Island, New York, now based in Asheville, North Carolina, Cpt. HyperDrive and Brucey B met in high school and became friends on their shared love for hip hop and music in general. Brucey formed a local hip hop group, IRD, and a few years later HyperDrive asked to join. Welcomed into the group, Brucey B taught HyperDrive all of his production techniques and how to operate audio hardware. Their chemistry was evident and their skills kept progressing.

Passion for innovative music and introduction to new genres and artists inspired the two to form a new group. BomBassic was born in Spring 2011 in an effort to combine their experience of production along with the limitless boundaries of electronic music. Since then they have formed a deep catalog of soul moving material that continues to evolve in style and sound.

Born of stardust, Antandra is the world bass music project of Jacob Louis aka DJ Story. His sound has been inspired by many influences including reggae, African music, psytrance, glitch, drum n bass, techno, house and so much more. His music takes the listener to the pure awareness at the source of consciousness where aural data is initially received and translated into the illusory experience giving shape to the formless. All is one. All is sound. We are eternal.

Brucey B is the Asheville based electronic music producer and live performer most known for his work in the duo, BomBassic. An avid producer of hip-hop, and more recently known for his electronic influence, Brucey B has been evolving as an artist and musician since 2004. Years of classical piano study combined with a love for creativity and soul-filled music have propelled him to create a sound full of smooth laid-back beats and bass lines resulting in a contagious pleasure-filled aura.